Knoll is a furniture manufacturer famed for its design. The pieces they compose can easily be called art, and in fact over 40 Knoll designs can be found in the Museum of Modern Art in New York. The company was founded in 1938 by Hans Knoll, a German émigré who had been strongly influenced by the German Bauhaus movement of the 1920s and early 30s. Hans, together with his wife, Florence, built one of the greatest furniture manufacturers in the world today, which still stands for quality craftsmanship and design and is still home to some of the world’s most iconic pieces of furniture. Though the company produces desks, tables, lighting and textiles, it is for their chairs that they are most well-known. Teaming up with the greatest designers of the twentieth century, they have produced and marketed instantly recognizable chairs that are now collectors pieces and heavily sought-after.

The Wassily chair was designed around 1925 by Marcel Breuer, the head of cabinet making at the Bauhaus. The name comes from its connection to painter Wassily Kandinsky, another Bauhaus resident at the time. He was the first to see and comment on Breuer’s new creation. Though the chair obviously predates the Knoll company (Hans was only about 11 when it was designed), the company acquired what was to become ones of its most iconic designs in a takeover of an Italian company that owned the patent. Breuer was inspired by the design of his tubular stell bicycle and wanted to make the world’s first tubular steel chair, using techniques from the bicycle manufacturers to bend the steel into the shape around the body.

This advert comes from 1970, shortly after the acquisition of the Wassily chair design by Knoll. The advert is dated to the seventies through the choice of brown leather for the strapping on the chair, and the softness of the background image. The chair floats effortlessly over the city, presumably Bologna from where the Gavina group that originally owned the designs was from. These chairs are still available, either direct from Knoll, or through sites such as eBay.

A Mies Van Der Rohe design, originally conceived for the German pavilion at the Barcelona international exposition in 1929. He wanted a chair fit for royalty, which the king and queen of Spain could enjoy. He took inspiration from the crisscrossed wooden chairs of the Roman emperors, trying to ”harmonize the old and new in our civilization.” Van Der Rohe was a close friend and associate of Florence Knoll, and granted the company permission to produce the chairs in 1948. Ven Der Rohe redesigned the chair in 1950, and there are differences between the original and modern reproduction to look out for if you are buying a Barcelona chair. At the same time as the company was acquiring the exclusive rights to the Mies Van Der Rohe Barcelona collection, Knoll was also cementing its relationship with the person who would become possibly their most iconic designer, Eero Saarinen. This Finnish architect and industrial designer, who also designed the Gateway Arch in St. Louis, designed many pieces for the company during his long association with Knoll. The womb chair was designed at Florence Knoll’s request, as she wanted “a chair that was like a basket full of pillows… something I could really curl up in.” The chair, and accompanying ottoman, allows for people to adopt many positions and move around as if they were in the room. This is by far the most famous Knoll advert. Designed by Herbert Matter, it ran for 13 years in the New Yorker. Initially Florence Knoll was not keen on the design (she had assumed leadership of the company after her husband’s tragic death in Cuba earlier in the year), thinking it undignified. However Matter prevailed and the advert became a sensation, showing a chair so comfortable that no one, no matter how filthy, could resist.

The Tulip chair was another Saarinen design for Knoll. It was originally designed to accompany a matching dining table, but quickly took off on its own. Its revolutionary shape, having just a single supporting leg to do away with the “slum of legs” as Saarinen called it, and the manufacturing from composite materials, such as fiberglass, made it an icon almost immediately. 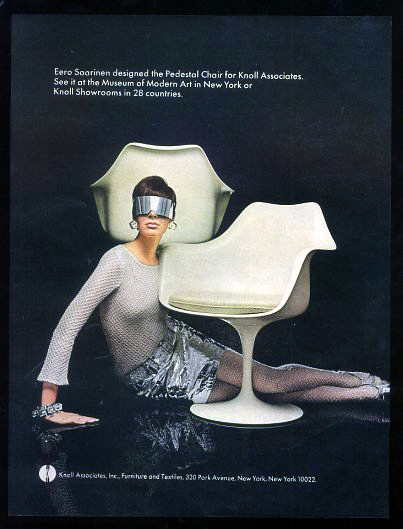 The space age nature of the chair can be seen from this 1967 advert. The chair was seen as futuristic, even then, and continues to be a representation of futurism even today. This chair was even used in Star Trek as an embodiment of what the future would hold for all mankind. Though difficult to find, a few manufacturers still produce replicas of the original tulip design.

The Pfister collection was one of the first collections to show design features that we would still consider modern. The sectionality of the sofa is still something you see in many contemporary, modular designs today. The idea was to create a system that could be changed as and when the owners wished, creating new interior spaces immediately and offering long term flexibility. There is a timeless appeal to this type of design, evident through its continued use today. As with all Knoll products, craftsmanship and quality was paramount to the success of the product, as Charles Pfister wanted to move away from the throw away culture of the fifties and sixties and imbibe objects with durability and lasting quality, evident through the double stitching and leather upholstery on these items. As one of the top interior designers of the late twentieth century he saw well-constructed objects as the centerpieces of any room, wanting them to be not only useful, but beautiful too.

A current advert for the Pfsiter collection, showing how well it fits into contemporary design despite nearing its 45th birthday. The clean lines of the sofa are accentuated by the clean lines of the living space that it rests in, and Pfister’s wish of long-lasting durability is echoed in the luxurious wood paneling of the surroundings.